“To me, Freemasonry is one form of dedication to God and service to humanity. I am proud to walk in fraternal fellowship with my Brethren. Why am I a Freemason? Simply because I am proud to be a man who wants to keep the moral standards of life at high level and leave something behind so others will benefit. Only as I, personally, become better, can I help others to do the same.”

Best known for his book The Power of Positive Thinking, Rev. Peale was also an active and respected Freemason. He was born this day in 1898 in Bowersville, Ohio. 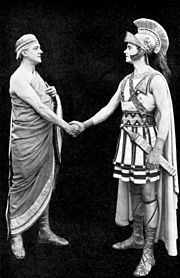 (ODLE). What an honor to address these young men striving to be the best DeMolay leaders and members they can be. Amidst all of the leadership training and life lessons a brief moment reminded me of the greatest purpose of DeMolay – and of Freemasonry, too, that gave birth to the order in 1919.

Just before my presentation, Dad Martin Woodworth, Executive Officer for Ohio DeMolay, read a page from the ODLE manual explaining one of the allusions in the DeMolay ritual to historic and legendary friendships – the story of Damon and Pythias.

Sentenced to die, Damon asked for permission to return home and set his affairs in order but promised to return. The incredulous tyrant who had sentenced him to death refused. Damon’s friend, Pythias, agreed to stand as substitute and to die in his place if he did not return. Damon returned true to his word. So astonished was the ruler at this act of brotherly love that he freed both men.

Martin then introduced me and ended his brief words by saying I was a friend for whom he would make such a sacrifice. As I would for him.  Although I began my presentation with some good-natured joshing of him, the truth is I found it hard to speak after hearing those words. Why? Not only because Randy and Martin share such friendship but because our own sons are forming the same kind of relationship. And I am honored to serve under his leadership so others might know such brotherly love too.

Damon and Pythias. Martin and Randy. Josiah and Brock.

How could I ask for more?