I am REALLY  behind already on my weekly DeMolay Centennial posts… I have a couple that are still drafts and need to get posted.  Here’s the first.

With the Ohio DeMolay Conclave recently concluded, Conclave (what DeMolays call their annual statewide meeting) is on my mind. One of the highlights of this gathering is the installation of the State Master Councilor. What about those who served in those early years of DeMolay here in Ohio (when DeMolay itself was only a few years old).

His given name was Adelbert W. Savage. The 1910 Census shows him as the youngest of four brothers living in Elyria with their parents George and Martha.  His mother died in 1917 when Brother Dell was only 10 years old. Brother Dell Savage was from Elyria, Ohio, and served as State Master Councilor for 1925-1926. Hailing from Elyria, he was a member of David J. Nye Chapter.  A search of period newspapers reveals his name and that second Conclave held at Indian Lake on Orchard Island. The first was held in Elyria in 1925.

Searching for his name in newspapers pops up several DeMolay references! The March 31, 1926, Lima News and Times-Democrat reports him present in Kenton, Ohio, for the initiation of 20 new members into Kenton Chapter.

Dell was clearly a leader in his high school. A yearbook from 1923 has him attending a statewide YMCA leadership conference with other boys from his school. The local newspaper in 1924 has an article by him about the high school football team. in 1930 he is still in Elyria and is listed in the census as a student. 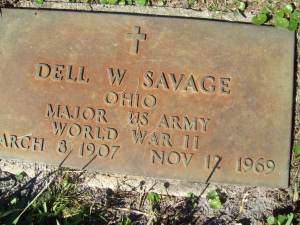 He married Loraine Davis on Christmas Day in 1945, probably on his return from the Second World War. He was a major in the United States Army during the war, serving in the Transportation Corps.  His obituary in the Elyria newspaper says he had lived in both Washington. D.C., and Elyria until moving to Florida in 1957. He died in Florida in 1969. His obituary says he was active in his local Presbyterian Church where he had been an elder.

I would love to learn more about this first leader of Ohio DeMolay. Hopefully at some point there will be an update to this post that I can share.