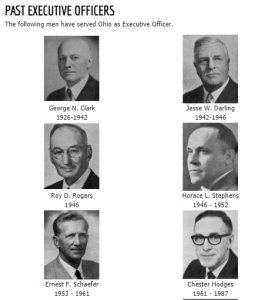 In the November 1922 edition of The DeMolay Councilor, the following appears (with some errors I won’t go into here):

“NEW DEPUTIES APPOINTED
According to the announcement made last week by Frank S. Land, grand scribe
and national organizer, Charles Woodruff of Columbus, O., has been appointed
deputy DeMolay of the Scottish rites (SIC) in Ohio by Judge Alexander G.
Cochran of St. Louis. The appointment of Melvin M. Johnson as Massachusetts
deputy DeMolay also was announced.”

The next issue lists Charles Woodruff as a deputy member of the Grand Council.
(Thank you to Past State Master Councilor Pat King for this information).

Over the next two years, Woodruff’s name crops up in local newspapers as visiting the DeMolay chapters founded in the early years of the order in Ohio. Notes of a gathering in Toledo that would give birth to our Ohio State Council show him present and in charge.

One of the mysteries has been – what happened to Dad Woodruff? I came across the newspaper article clipped here

that answers the question. By 1930 Dad Woodruff had passed due, presumably, to his illness that led to his resignation in 1924.

He was a member of York Lodge # 563 and later a charter member of Kinsman Lodge # 617 which he served as Master in 1915. He was according to records of the Grand Lodge active in central Ohio Masonic activities for much of the late 19-teens’ and into the early 20’s. What else he may have done Masonically is not recorded in anything I have found.

I have been working on his history and will have more in next week’s post about the history of the Grand Lodge of Ohio’s position on DeMolay (I did a presentation on this at the recent Ohio Allied Masonic Degrees Ingathering in Columbus).

One of the lingering questions is… what happened between 1924 when Dad Woodruff resigned and 1926 when Dad George Clark took the helm?